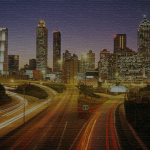 Georgia is booming in the film industry lately. Georgia.org lists that “the Motion Picture Association of America (MPAA), the motion picture and television industry is responsible for more than 77,900 jobs and $3.8 billion in total wages in Georgia, including indirect jobs and wages. Nearly 23,500 people are directly employed by the motion picture and television industry in Georgia, including 8,188 production-related employees.”

Not only does the film industry keep people busy, it keeps Hot ATL Party Bus busy too!  Our buses have been used for film production party bus limos in scenes and also to carry cast and crew members to on set events and wrap parties.

If you are a film production manager or coordinator and need a film production party bus, we have exactly what you need for your production.  If you need to transport your talent or crew to the wrap party, do it in style and in the comforts of one of our party bus limos.